You are here: Home1 / Oman2 / Asyad Terminals – Duqm to manage and operate 3 berths in Port of Duqm... 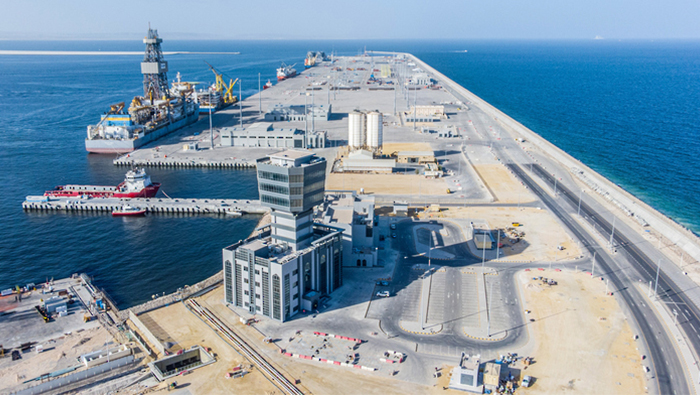 Muscat: In line with the official inauguration of Port of Duqm, Asyad Ports-Duqm is set to commence the operation and management of the general cargo terminal that includes three commercial berths in Port of Duqm, following Asyad Group’s strategy to enhance the competitiveness of Omani ports and maximise their investment and economic returns, as underpinned by Oman Logistics Strategy (SOLS 2040).

Asyad Terminals – Duqm, established through a partnership between Asyad Ports and Port of Duqm, will manage and operate three berths in Port of Duqm, which can accommodate the largest container ships and very large crude carriers (VLCC) to serve customers and trade partners.

The first one is a multi-use general cargo berth with a capacity of about 1 million TEUs per annum, the second is a bulk cargo berth offering a capacity of almost 5 M TEUs per annum, while the third is a Ro-Ro vessels berth. These berths will consequently absorb the anticipated growth in ships traffic and cargo operations, ramp up a trade via Port of Duqm with international ports, provide exporters and suppliers of local and global business communities with rapid solutions, and meet Sezad’s economic projects’ requirements.

“This significant milestone, which translates the pillars and objectives of Oman Vision 2040, gives to national operators priority of managing large Omani ports and associated logistics services, and optimizing the use of port equipment and facilities to promote national exports and Oman’s economic growth”, said Sheikh Nasser Sulaiman Al Harthy, Chairman of the Board of Directors of Asyad Group.

Al Harthy also added that the management of Asyad Group adopts a clear strategy aimed at enhancing logistics investments and increasing the operational efficiency of Omani ports, which would generate new prospects for international investment and trade companies and private Omani companies in this vital sector.

As additional results, the Omani ports will become a much sought-after hub for various global shipping lines and will create new business opportunities for SMEs in different sector-related operational services.

On his part, Dr Ahmed Mohammed Al Abri, CEO of Asyad Ports, indicated, “Asyad is moving ahead in developing the ports sector in Oman, achieving further progress and taking multiple initiatives to turn the ports of Oman into an investment pull factor. In co-operation with various government agencies, those ports will grow to become a leveraging pillar for trade and economic development in the country.”

He subsequently highlighted that assigning the management and operation of the general cargo terminal in the Port of Duqm to Asyad Terminals – Duqm was a serious step forward into the circle of worldwide competition in the area of operation of international berths and ports. He elaborated that Asyad Terminals – Duqm will seek to develop the superstructure of Port of Duqm and handle general, bulk and rolled cargo.

Furthermore, the Company will provide competitive incentives and initiatives to facilitate business and raise the competitive advantage of Port of Duqm, thus becoming a multi-purpose global trade gateway offering access to markets that include more than three billion consumers around the world.

“Asyad Ports has over the past years demonstrated its solid know-how, administrative capabilities, and national competence, in managing Oman’s ports (A’Suwaiq, Shinas, Khasab, Port of Sultan Qaboos and Khazaen Dry Port), and employing those abilities to strengthen the crucial role of Port of Duqm as a prime location and a nerve centre in the global supply chain,” added Dr Ahmed Al Abri.

In the same vein, particularly on the ICV side, Dr Ahmed Al Abri pointed, “Assigning the management and operation of the commercial berths in Port of Duqm to Asyad Terminals – Duqm will undoubtedly lead to finding a common ground with the private sector in many fields, and will offer business opportunities to Omani SMEs, in various logistics services and support activities such as customs clearance, transport, storage and maintenance. This will naturally occur with the rebound of trade through the port and the local markets become connected to global markets through direct shipping lines.

Port of Duqm, officially inaugurated in February 2022, is one of the most important and largest ports in the Middle East as it extends over an area of 188 square kilometres and consists of 9 berths which are 2.25 km long, 350 m wide, and up to 18 m deep. The Port of Duqm incorporates various industrial lands, a stretch of 2,000 hectares and logistics lands estimated at 1,000 hectares. It has an 8.7km breakwater that rises 11 metres above sea level, in addition to a secondary breakwater of 4.6km. Thanks to its unique specifications, the Port can receive the largest ships in the world.